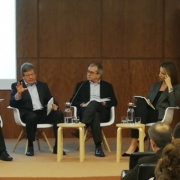 Institut Cerdà, ESADE, Barcelona Global and La Vanguardia, with the support of Sogeviso, set up this event in order to offer provide an in depth debate on this subject in which the most relevant aspects were discussed, and opinions and experiences were shared, with the aim of facing this social challenge.

The debate was divided into three sessions, the first on the vision of the problem, the legal framework and the challenges to face, the second on specific or alternative proposals to create more affordable housing; and the third on the economic-financial vision that any policy needs in order to survive.

The first session “Challenges for housing: Affordable Housing” was led by Francisco Longo, Director ESADEgov, Centre for Public Governance, and involved Carme Trilla, Director of the Metropolitan Housing Observatory, Assumpció Puig, Dean of the Barcelona Institute of Architects, José Garcia Montalvo, Professor of Economics at the Universitat Pompeu Fabra, Sergio Nasarre, Director of the Housing Department at the Rovira i Virgili University.

During the afternoon session, a debate was held with candidates standing for Mayor of Barcelona in the forthcoming municipal elections that was moderated by Enric Serra de La Vanguardia.

Videos of the sessions will be available shortly.

A new tool allows the evolution of the price of fuel for container transporters...
Scroll to top