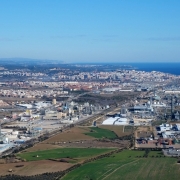 The Tarragona Chemical Business Association (AEQT in its Catalan and Spanish acronym) has decided to join the Tarragona Air Quality Observatory, which has been collecting and analysing volatile organic components in the Camp de Tarragona area since 2018. It is an initiative promoted by Repsol and coordinated by Institut Cerdà. The entire petrochemical sector in the area has now joined the observatory en masse.

The decision is part of the commitment of the companies in the Tarragona industrial estates to protect the environment in general and air quality specifically. These industrial companies were already actively involved in the Camp de Tarragona Local Air Quality Committee, set up by the Government of Catalonia for this purpose. Joining the Observatory represents a further step in this commitment, recognising the social demand for information on air quality in the local environment around the chemical plants in the Camp de Tarragona.

Given that transparency is one of its objectives, the observatory periodically publishes the data collected in a report. The next edition is expected to be published in a few weeks.

What are companies doing? share their experiences in relation to management...
Scroll to top