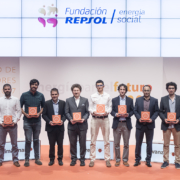 This business accelerator, launched six years ago, aims to support the most innovative projects in energy and mobility, and to enable them to reach the market as soon as possible.

The projects that will start the acceleration program will receive up to 144,000 euros for one year and the ideas will be supported with 2,000 euros per month for 12 months. In addition to economic support, the projects and ideas will be accompanied by a team of mentors during the acceleration phase, and will also receive technical and legal advice, specialized training appropriate to their needs and access to potential investors.

All the selected proposals stand out for their degree of innovation in the field of efficiency, digitization and new materials in the energy and chemical industry; in the distributed generation and storage of electricity, as well as in the field of mobility.

The selected proposals, which come from both Spain and other countries, are the following:

Inanoenergy (Portugal): autonomous micro-generators that use the residual energy to generate electricity, especially to feed the sensors that monitor the pipe networks in industrial installations.

Manganese Flow Batteries (UK): ultra-efficient manganese and hydrogen based batteries that provide energy for longer and at lower cost.

C2C-New Cap (Portugal): Superfast materials for energy storage based on metallic oxides, which allow energy to be stored more safely.

Muon systems (Bilbao): a muon beam tomography system to check blast furnaces and combustion equipment without stopping production. This initiative was supported by the Entrepreneurs Fund as an idea in the previous call.

Place to plug (Tarragona): a unique and collaborative platform for the management and use of electric car recharging points. This online platform allows drivers to locate and activate both public and private recharging points from a mobile phone.

The Entrepreneurs Fund in figures

As part of its commitment to a more sustainable energy future, Fundación Repsol launched the Entrepreneurs Fund in 2011 with the aim of promoting talent and supporting the best technological and sustainable solutions in the field of energy and mobility.

Since its launch, 36 start-ups have been accelerated, to which these eight, newly selected, initiatives are now being added. The group of accelerated companies has obtained almost 16,5 million euros of public and private investment, have made more than 140 prototypes and in 2016 alone, invoiced 2 million euros.