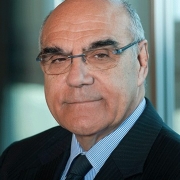 The Board of Trustees of the Institut Cerdá appointed Salvador Alemany Mas as the new President of the Foundation, replacing Joan Molins Amat.

He is president of the Gran Teatre del Liceu Foundation. He has been a trustee of the Caixa D’estalvis i Pensions Banking Foundation of Barcelona since June 2014. He has chaired the Abertis Foundation, the Advisory Council for Economic Reactivation and Growth of the Generalitat of Catalonia, the Circle of Economy and the Social Council of the University of Barcelona.

He has been awarded several distinctions including the Commendatore del l’ordine al Merito de la REPPUBILCA Italiana 2003; the Gold Medal of the Spanish Red Cross 2007; the Grande Ufficiale della Stella de la Solieda Medal of the Italian Reppublica 2008, the Gold Medal of Civic Merit of the City Council of Barcelona (04/18/11), the St. George Cross of the Government of Catalonia (27/4/11); the White Cross of Police Merit (10/3/11); the Entrustment of the Order ot Isabel the Catholic of the Government of Spain (8/01/14); the White Cross of Military Merit of the Ministry of Defense (06/25/14) and the Officier dans l’ordre National de la Légion d’honneur-2015.

Salvador Alemany replaces the outgoing President, Joan Molins. Dr. Gabriel Ferraté is the Honorary President and Jordi Mercader is Vice President. Institut Cerdá is directed by Carles Cabrera and has a consolidated and multidisciplinary team of professionals, with offices in Barcelona, Madrid and Santiago de Chile.

How connectivity has changed sectors such as health, education or culture
Scroll to top