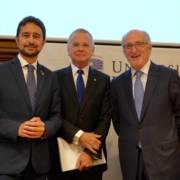 Repsol, through its Foundation and in collaboration with the University of Barcelona, has launched the Chair of Energy Transition. This initiative initially focuses on research and dissemination of CO2 recovery and utilization systems. This is one of the great challenges in the fight against climate change and is also key to meeting the goals of the Paris Agreement. The objective of the chair is to promote knowledge, rigorous and scientific debate, on energy transition and climate change, and also to disseminate the results.

The chair is starting out from the University of Barcelona under the direction of Mariano Marzo, Professor of Stratigraphy and Lecturer in Energy Resources and Petroleum Geology. It will later be extended to other universities.

In his speech, Brufau stressed that scientific knowledge and technological neutrality should lead the debate on energy transition and climate change. “There are no unique recipes and open and flexible approaches that contemplate the different technological options should be promoted,” said the President of Repsol and the Repsol Foundation.

For his part, Mariano Marzo, in his presentation “Energy Transition: from commitment to action”, referred to the so-called “New Green Pact”. This is  a new ground breaking concept. It refers to the need to seize the opportunity that the challenge of an accelerated reduction of greenhouse gas emissions offers to undertake a radical socio-economic transformation that, at the same time, leads to greater social justice. This is an attractive idea that will have to be effectively substantiated in practice. In the opinion of the Chair of the Chair, this is something that other major international climate change related agreements, such as the Paris Agreement, have not satisfactorily achieved.

Within the framework of the collaboration with the University of Barcelona, initiatives such as a World Innovation Observatory will be developed. These will work on the latest advances in the recovery and use of CO2 and on a challenge in which students propose solutions against climate change. Workshops will also be held with experts and all the agents involved in the energy transition debate.

This chair is part of the commitment of Repsol and the Repsol Foundation to  the United Nations’ Sustainable Development Goals and the fight against climate change.

Densification and rationalisation of the 5G mobile networks across the coun...