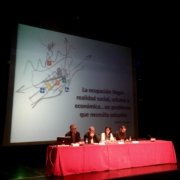 It is currently estimated that there are more than 87,500 families, equivalent to 262,500 people, illegally occupying (squatting) homes in Spain. This situation means that up to 20% of public housing assets are effectively immobilised. According to the first study carried out on this subject by the Institut Cerdà, this illegal occupation situation has proliferated amongst groups beyond those at risk of poverty and social exclusion.

According to the study, a number of factors contribute to these high figures: a deficit of social housing stock, an increase of 76% in the number of households without any type of income in Spain since 2007, and existence of more than half a million empty homes. This situation is reflected in the fact that the number of evictions by court order has multiplied by 2.25 since 2008. The study was made public as part of an event organized by the Association of Managers of Social Housing of Catalonia and the Management of Housing Services, Urbanism and Activities of the Diputación de Barcelona, entitled “The occupation of housing, a challenge in the public agenda”.

The management of the squatting phenomenon is complex and, as stated in the study by the Institut Cerdà, involvement of all stakeholders, including public administrations at all levels, legislators, housing providers associations and consumer groups, property owners, the legal sector and police services.

The consequences of illegal occupation are usually economic but many other factors are also involved including social, cultural, cohesion, physical or structural. The lack of stable and secure housing can be a source of stress and anxiety. In addition, a lack of a legal tenancy agreement makes access to public services more difficult and increases the risk of social exclusion and stigmatization of the occupants.

The study shows that conflictive squatting situations, although they only represent between 10% and 25% of the total, have a high impact locally and increase factors such as insecurity, noise, illegal activity, urban degradation, vandalism, negative impacts on local trades and businesses and the expulsion of the original residents.

The municipalities interviewed agreed that there is a negative economic impact in the range of 3,500 to 30,000 euros per dwelling when there are problematic occupants. It is estimated that illegal occupation results in a loss of property value of between 40 and 60%.

According to Carlos Cabrera, General Director of Institut Cerdà, “illegal occupation, despite having been a transitory way to access housing in situations of social emergency, is not the solution, neither for individuals, nor for the community. Although squatting and its solutions are a complex phenomenon, there is a broad consensus that the current legislation is not effective and that possible solutions affect all the actors involved. In contrast, there is no consensus about the causes and the solutions to the problem. It is clear though, that solutions will only be found by means of the implication and collaboration of all the agents “.

This is the first time that an attempt has been made publically to analyze the effects and scope that the phenomenon of illegal occupation has on people and cities. The data collected for the study have been facilitated by municipalities of Catalonia, the Community of Madrid and other areas of Spain.

You can consult the study here

Institut Cerdà was present at the First Ibero-American Strategic Communication...