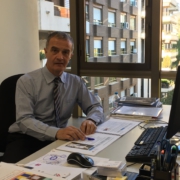 Julián Arenas is Director of the Innovation and Transport / Logistics Department of Institut Cerdà. In recent years, this department has been evaluating the technical, legal and economic feasibility of implementing liquefied natural gas (LNG) as a fuel for rail transportation.

​How did the initiative to apply LNG to rail passenger transport start? Is it already a reality in other countries?

LNG is being widely used for road freight transport of goods by road and also, to a lesser extent, for freight transportation by sea and rail (rail experiences in USA, Canada and Russia).  Likewise, LNG has already been implemented on ships destined for passenger transport. In this context, the Spanish gas companies (Enagas, Gas Natural Fenosa and Cepsa), thought it would be a good idea to studying the application of LNG in passenger rail transport.

The pilot test of LNG application to rail passenger transport is the first to be carried out in Europe.

What has Institut Cerdà’s role been this process?

Institut Cerdà has been the coordinator of all the parts of the project throughout all its phases. First, we carried out the study of the technical, legal and economic viability analysis of the project. This concluded that it was viable although several barriers were identified that had to be checked and that could be overcome in a pilot test. We then promoted the initiative and worked on developing the work team by means of a series of workshops to bring together the different sectors involved in the project (gas, rail and technology). The initial team was formally constituted as a consortium. Its objective was to define the pilot test at the technical level, scope, schedule and costs, as well as to determine the role and positioning of the different agents involved. The Consortium was formed by: Enagas, Gas Natural Fenosa, Renfe, Bureau Veritas, ARMF and Institut Cerdà. We have also participated in the coordination, management and support in all the tasks necessary to achieve the pilot test and finally the final study of conclusions and results obtained.

What are the advantages of LNG compared to traditional fuels?

Environmental standards for greenhouse gas emissions, such as CO2, and atmospheric pollutants, such as NOx and PM are being increased by National Governments and International Organizations i. The International Union of Railways has set the “Carbon Rail Challenge 2050” objective of achieving a 100% decarbonized railway system, with 50% more efficiency and less noise, by 2050.

Compared to other solutions or alternatives, such as electricity or diesel, investment in LNG offers, shorter payback times and lower costs:

It should be highlighted that LNG is a mature and applicable technology in the short term:

What are the main challenges of alternative energies for transport?

Given the importance of transport in terms of all emissions (according to Eurostat, the transport sector accounts for 25.8% of the total of greenhouse gas emissions), the main challenge is to achieve more sustainable transport that improves the living conditions of people.

It is important to point out that, in order to achieve a massive roll-out alternative energy application in transportation, the deployment and implementation of the recharging infrastructure is essential in order to make supply availability ubiquitous. This is true both for passenger or freight, and both for electric and for NGV.