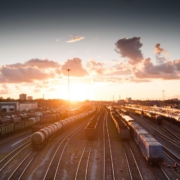 The aim of the day was to highlight the socioeconomic development related synergies that can be derived from a good interconnection between the Mediterranean and Atlantic corridors and the Ebro Axis in the largest single area of the industrial and logistic activity in Spain. Lluís Inglada, Territory and Public Sector Director at Institut Cerdà, presented the study “Lleida Logistics Platform”.

Speakers at the event included a variety of specialists, managers of the main logistics terminals of both the Mediterranean and the Atlantic axes, representatives of the ports located in the Mediterranean and in the Bay of Biscay. Attendees included representatives from European institutions, the Spanish Government, and the Governments of Catalonia, Navarra and the Basque Country. The act was presided by Joan Reñé, president of the Diputació de Lleida; Ricard Font, Infrastructure Secretary; Joan Amorós, President of FERRMED; Ramon Tremosa and Pawel Stelmaszcyk, both Members of the European Parliament; Josep Rull, Minister of Territory and Sustainability; and Juan Barios, Coordinator of the Mediterranean corridor.

Within the framework of the day, it was made clear that there is a strong the political and economic consensus demanding that Lleida should not be forgotten when deciding future investments.

The purpose of the study carried out by Institut Cerdà, with the support of FERRMED, was to make a diagnosis of the demographic, economic and infrastructure situation of the Province of Lleida. The study highlighted the potential of the territory in terms of promoting the logistics sector and attracting business activity linked to freight transport.