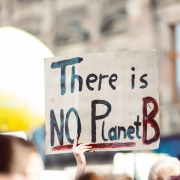 If all goes well, the 26th United Nations Climate Change Conference, COP26, organised by the United Kingdom in collaboration with Italy, will take place from 1st  to 12th  November in Glasgow, Scotland, under the banner heading “Uniting the World to cope with climate change”. The summit was due to take place in late 2020 and was postponed due to the pandemic.

The Conference intends to bring together representatives of two hundred governments from around the world. It will focus on the issues in need of solving most urgently given the increasingly clear evidence of the effects of climate change. It will also be aiming to find a consensus that allows compliance with the Paris Agreement. In this respect, work is already in progress on the “Paris Rulebook”. This document will contain the set of measures that must be implemented to ensure compliance with the Agreement: keeping the increase in global temperature below 2ºC and moving towards climate and energy scenarios that contribute to limiting this increase to 1.5 ºC.

What are the objectives that have been set for COP26? They can be basically summarised in the following four points:

– Ensure global net zero by mid-century and maintain the possibility of achieving the 1.5ºC objective. Countries must present plans with ambitious emission reduction targets for 2030 (NDCs, Nationally Determined Contributions), in line with global net zero by mid-century. To be able to comply, they will need to accelerate the elimination of fossil fuel consumption, encourage investment in renewable energy, reduce deforestation and accelerate the transition to electric vehicles.

– Mobilise financing. To meet the first two goals, developed countries will need to meet a commitment to raise at least $ 100 billion annually in climate finance, and to unlock the money from the public and private sectors required to secure the net zero goal worldwide.

– Work together to provide solutions. – First, by completing the Paris Rulebook.

What are the necessary conditions to achieve resilient organisations?
Scroll to top