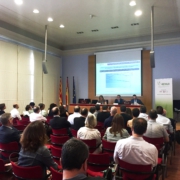 The CEMA Foundation, in collaboration with Institut Cerdà, organized an event to present the European Commission Communication on “The role of waste-to-energy in the Circular economy “.

Jorge Díaz del Castillo, of the European Commission,  presented the Communication which shows that approximately 1.5% of the EU’s total energy consumption currently comes from waste recovery although this percentage could increase to as much as 30% if using state-of-the-art technology.

Two reference studies related to the use of cement industry waste derived fuels were also presented. Jessica Johnson, Communications Director of the European Cement Manufacturers Association (CEMBUREAU), presented a CEMBUREAU study which highlights the barriers to and opportunities for increased use of alternative fuels in various EU countries. The other study presented was the Seventh Update of the Evolution of Waste Recovery in Cement Factories in Spain since 2004, carried out by Institut Cerdà for the CEMA Foundation.

Miguel Hernández, Institut Cerdà’s Environment Director, presented the study on recycling and recovery of waste in the Spanish cement industry. He emphasised key data such as the fact that, by waste recovery and recycling, the cement industry in Catalonia avoided emitting more than 171,000 tonnes of CO2 in 2015. This is equivalent to the annual emissions of more than 114,000 vehicles. The study and graphic summary are available for consultation.

Ferran Falcó i Isern, Secretary General of Territory and Sustainability of the Government of Catalonia concluded the event.